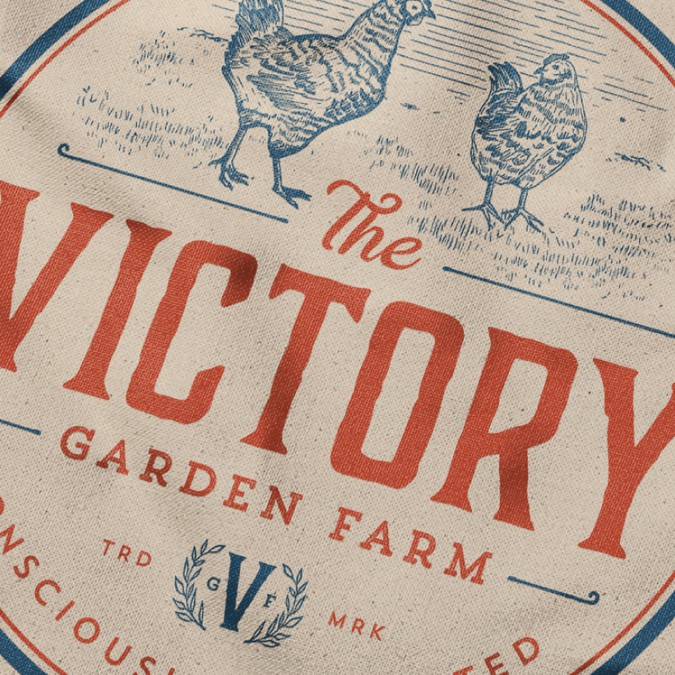 Create an iconic vintage design to represent and embody our small organic farm.

VICTORY! needed a new logo design and created a contest on 99designs.

A winner was selected from 22 designs submitted by 7 freelance designers. 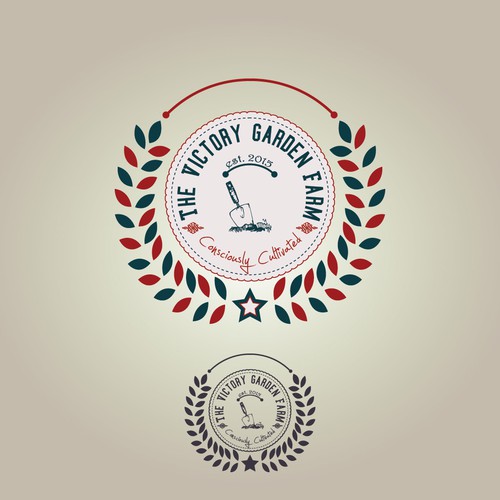 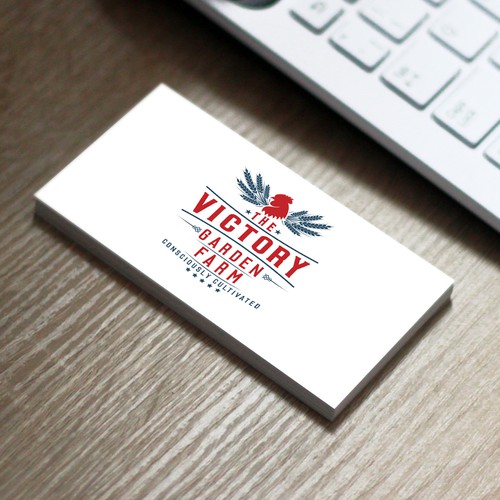 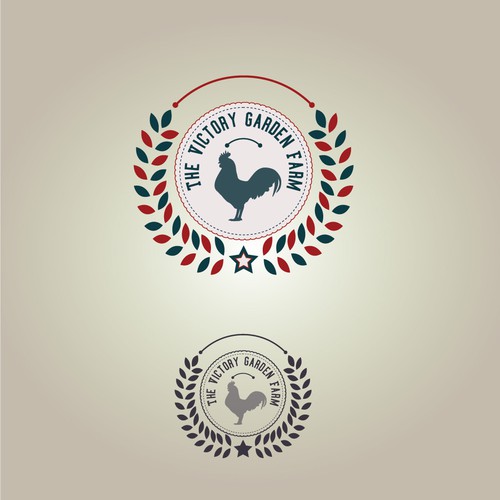 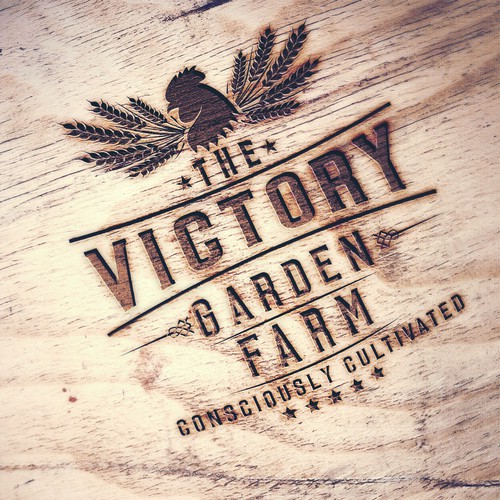 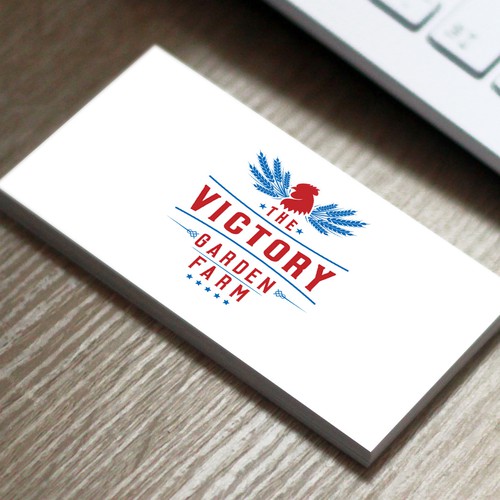 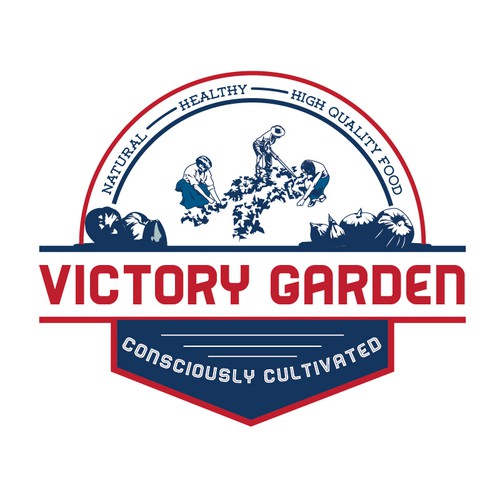 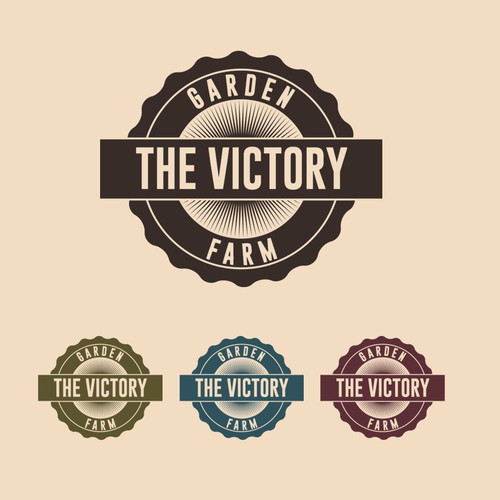 Winner - GOOSEBUMPS
Creative, Professional and Organized. 5 Stars. Nat did a wonderful job of translating goals into reality. This was a very diverse and challenging task. Our organization was represented very well by the design work.
- Anonymous

The VGF's mission is to grow the most AMAZING, DELICIOUS, NUTRITIOUS food possible! The VGF is a small intensive organic farm that focuses on raising heirloom variety produce, and raising heritage breed animals in a sustainable way. We work with the environment to help make it better, than we found it. We sell at local farmer's markets, restaurants, and to our own customer base.

What colors do you want to see in your design?

We would like the logo to capture the essence of the old war garden propaganda posters from the early 1900's. Our farm is passionate about preserving genetic diversity, so our focus is on raising heritage breed animals, and growing heirloom variety produce. We NEVER use any pesticides. We are organic & non GMO.

What is a Victory Garden?
https://en.wikipedia.org/wiki/Victory_garden

Here are some propaganda posters from the time period when Victory Gardens were prevalent. I think these posters are SO COOL!
http://modernfarmer.com/2013/05/12-…n-posters/

What does heirloom & heritage mean?
http://www.thekitchn.com/heirloom-h…s-it-64468

How did we choose the name The Victory Garden farm for our farm? Well, let me explain. We just bought our farm on May 28th 2015. This farm is LITERALLY my dream come true! I've been farming for the last 4 years, but I have always worked on other people's farms.

I had a completely different name picked out.
When we bought this farm however, the name I had picked out just didn't work. My family and I tossed a lot of ideas around, but we finally came to the name "The Victory Garden Farm" for the following reasons.

My name is Vanessa, so I have an affinity already, for the letter V.
V for Victory
The farm is located 1/2 mile north, of the birthplace of Flag Day.
My partner is in the US Military and we are a very patriotic family because of that. Once my partner learned the history of Victory Gardens, he felt a connection. It tied his military career into the farm.
Our farm is small. I will be growing on 5 acres. In the farming world, small scale farming is called, "market gardening" We have a "Market Garden" So my thought process took me to, "Victory Market Garden" then to, "Victory Garden" but since we raise animals, that makes us a farm. So, that is what lead to the name, "The Victory Garden Farm"

Create a western themed logo for our conference!
US$ 299
I would like a logo created for our annual conference. The theme of the conference is western/cattle brands and the slog
101
entries
21
designers
Start-2-Finish Consulting - Cannabis Grow Consulting
299 US$
Start-2-Finish Consulting is a complete grow consulting company that can help with setup, construction, products, advice
80
entries
10
diseñadores
Miller's Meadow Farm
299 $US
Hobby Farm
78
entries
28
designer graphistes
Autonomous farming-as-a-service company needs a high-tech logo | Sabanto
499 US$
Sabanto is a farming-as-a-service company that uses its own proprietary autonomous farming technology to complete field
230
entries
67
diseñadores
Back Creek Wagyu
299 US$
We are in the specialty cattle business raising high end Wagyu cows to sell to other ranches offering a superior breedin
118
entries
44
designers
PREMIER HOLISTIC - AQUAPONIC MEDICAL CANNABIS
299 US$
Premier Holistic is a family farm in Oklahoma that specializes in grass-fed Wagyu beef, Aquaponic grown Herbs and Vegeta
75
entries
27
diseñadores

Get started now
Designers choice...Fun creative CANNABIS logo
USD 299
We are a legal cannabis producer.
148
entries
48
diseñadores
Create a striking fresh logo for a Cannabis Farm!
$299
We cultivate only the most unique strains of cannabis for the retail market. Our target market is both connoisseurs of
92
entries
29
デザイナー数
Design a earthy logo for a tropical fruit nursery
US$299
We grow tropical fruit, tropical fruit trees, palm trees, heliconias, and flowering tropical plants.
43
entries
11
designers
Logo for Ag Music Event
CA$ 399
This logo is for an event where farmers and business professionals will raise pledge money for charity, to play music on
72
entries
20
designers
Urban microgreen farm needs a logo!
USD 299
We are a vertical urban microgreen farm that markets direct to consumers in our local market. We stress the health bene
91
entries
18
designers
BNR Ranch needs a creative classic logo!
$299
Produces premium quality certified black Angus beef and premium quality Berkshire pork for retail consumers; target audi
198
entries
31
designers