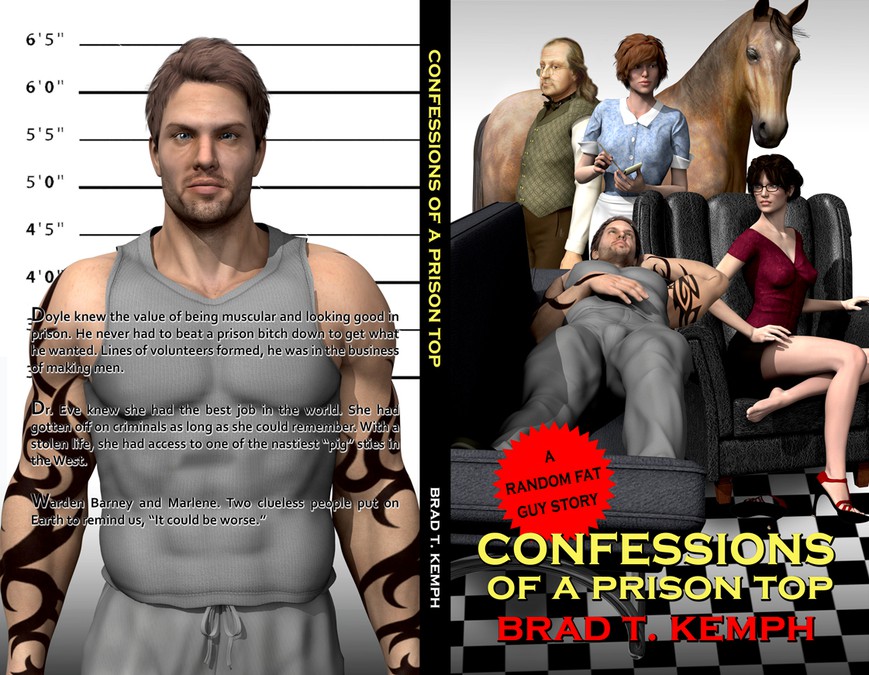 Doyle VK needed a new book or magazine cover design and created a contest on 99designs.

A winner was selected from 9 designs submitted by 2 freelance designers. 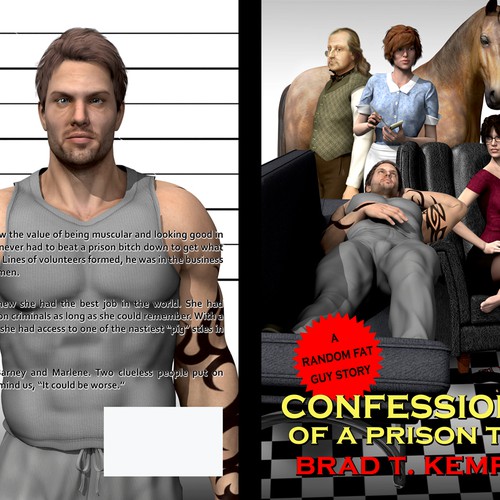 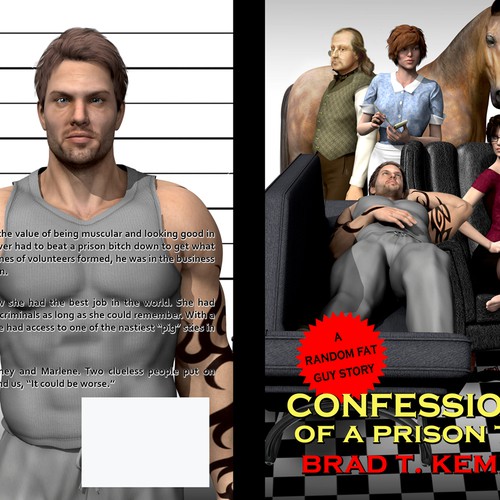 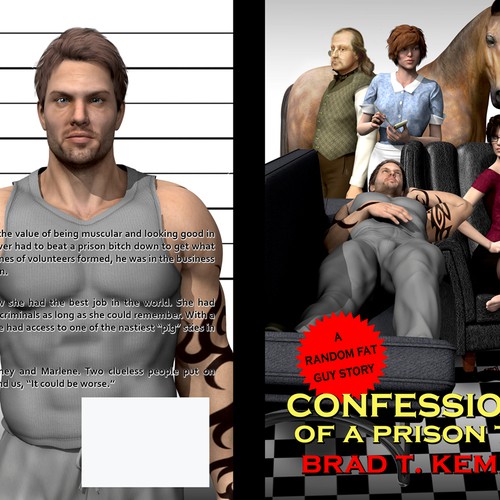 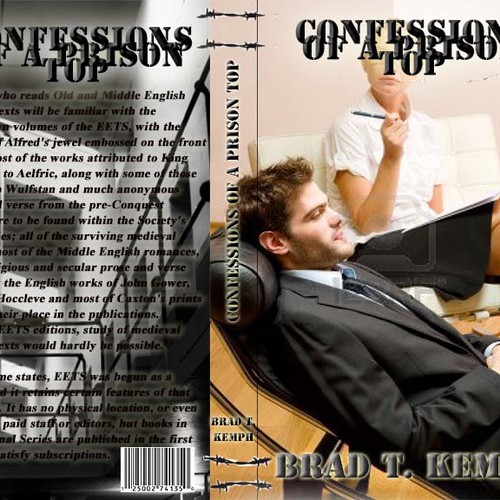 Winner - DHMDesigns
Great work. It will help my career. I look forward to using the cover soon.
- JamesKPratt

Concept #1- Doyle (main character and prison inmate) lying on a psychiatrist’s couch. He’s dressed in prison clothing- gray t-shirt or shirt and gray pants. He is very muscular, dark hair, beard, good looking. The psychiatrist is a woman and sitting in a chair “listening” to Doyle in therapy. She looks like a naughty librarian- sexy, hair up in a bun maybe, “doctor” glasses, short tight skirt, tight blouse, moderate (not too big) of breasts. Looking over Doyle on the far side of the couch (behind the couch) are 3 figures. Benjamin Franklin, a young/pretty waitress and a horse. The scene can be in a psychiatrist’s office or just in “white space.” The horse should not be white, any brown color is fine but it should be an average looking horse. The waitress should be a diner waitress, she works around truckers and cowboys; she does not work in a fancy restaurant. Ben Franklin must be recognizable as Ben Franklin but not an old man (see image).

Concept #2- Doyle (main character and prison inmate) is on one of those prison telephones. The one where you sit behind the glass in a booth and talk to your lawyer or family on the phone. He’s dressed in prison clothing- gray t-shirt or shirt and gray pants. He is very muscular, brown hair, beard, good looking. He should be talking to someone. The other person is a good looking younger man. Fresh faced, dressed in a “farm-themed” t-shirt, western style shirt or plaid shirt. He could be wearing a John Deere cap.

Back cover concepts- prison yard, image of prison cells, inside a prison cell, image of just hands hanging out of prison bars, chain link fence with concertina wire, mug shot of Doyle with the sign in front of him and the height marks (Doyle is 6’4”),

Color schemes- black & white, darker or muted colors, not bright colors, maybe black/gray/red. The only bright color I can see using is red (there is blood in the book since there is violence in the story).

I spent a lot of time on finding images that are “right.” I have named each image according to concept or character.

Doyle knew the value of being muscular and looking good in prison. He never had to beat a prison bitch down to get what he wanted. Lines of volunteers formed, he was in the business of making men.

Dr. Eve knew she had the best job in the world. She had gotten off on criminals as long as she could remember. With a stolen life, she had access to one of the nastiest “pig” sties in the West.

Must be print-ready as a final product.

book or magazine cover for Clarisse Thorn
USD 299
This book is about BDSM. In general, I write and speak about sex, gender, subcultures and media.
140
entries
33
designers
Remain Free Needs a Book Cover
$799
Remain Free is a memoir about a teenager's friendship with Troy Davis, a death row inmate executed in 2011.
87
entries
10
designers
To make a book on property taxation look reader friendly and attaractive and a bit different
AU$ 299
Book, ebook and newsletter publishing, editing and writing in the areas of business, personal investment and finance...
50
entries
17
Designer
Courtship in Crisis Book Cover
USD 799
We are primarily targeting conservative homeschoolers. Our secondary target audience is American singles. Our tertiar...
474
entries
117
designers
Design a book cover that will "Captivate & Engage" as well as its information will.
US$299
This book, "Captivate & Engage: The Definitive Guide for Nonprofit Websites," was written by two experts in the field...
71
entries
20
designers
Create a book cover for a personal development book on the topic of failure
US$299
Self-publishing a book in the personal development genre...
38
entries
12
designers

Get started now
Create an exciting book cover for the story of a daughter's journey to Burma.
AUD 299
I write fiction primarily for women aged 35-60....
33
entries
12
diseñadores
Book cover for academic study on internet prostitution
299 $US
Non-fiction academic book publisher...
53
entries
14
designer graphistes
Different Walks
US$299
Target audience is a young adult. Similar to a John Green novel. Fiction, teen book. This book was written for fun....
98
entries
28
designers
We need a Book Cover for a Non-Fiction title
499 CHF
Swiss Book publisher with fiction and non-fiction titles....
65
entries
15
designer graphistes
Book cover design for Ninja Parenting Skills
US$299
We teach parenting communication skills to parents of adolescents/teenagers....
56
entries
18
diseñadores
Attitude is Everything! Competitive air guitarist and cancer survivor needs a RAD book cover design
$299
I'm a book marketer who happened to be diagnosed with Stage 2 breast cancer last year. To get through treatment, I co...
49
entries
12
designers
Learn more about book or magazine cover design
See how it works