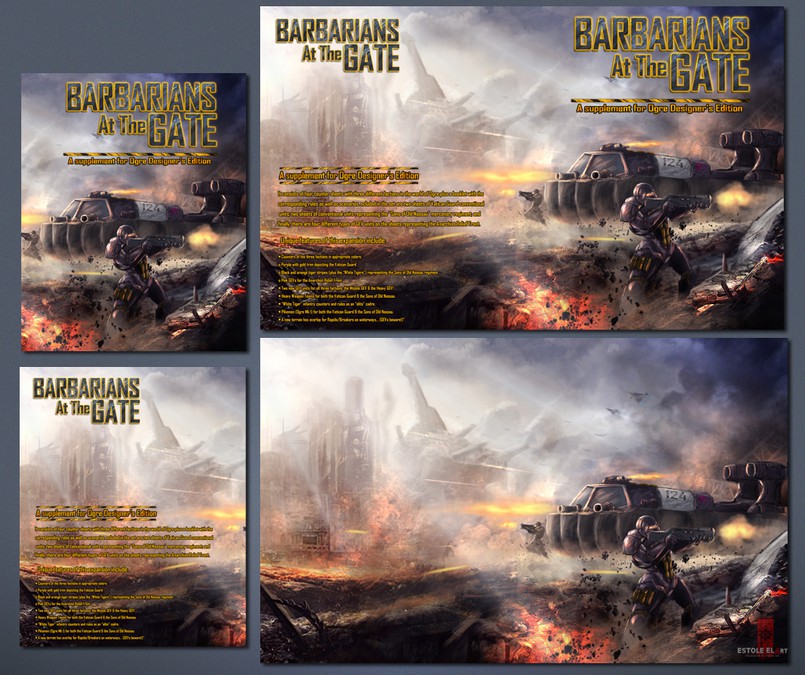 Create cover art for a supplement to the greatest futuristic tank board game ever: Ogre

dmetzger needed a new book or magazine cover design and created a contest on 99designs.

A winner was selected from 42 designs submitted by 12 freelance designers. 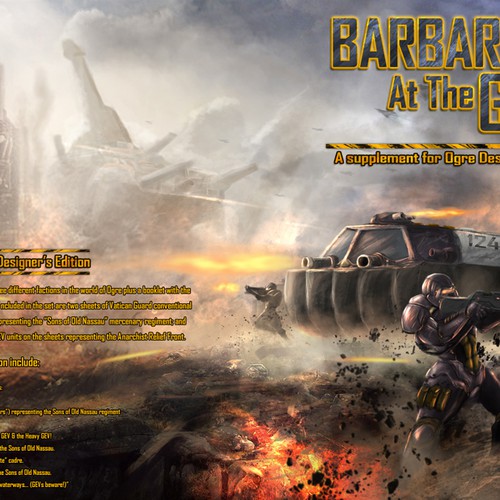 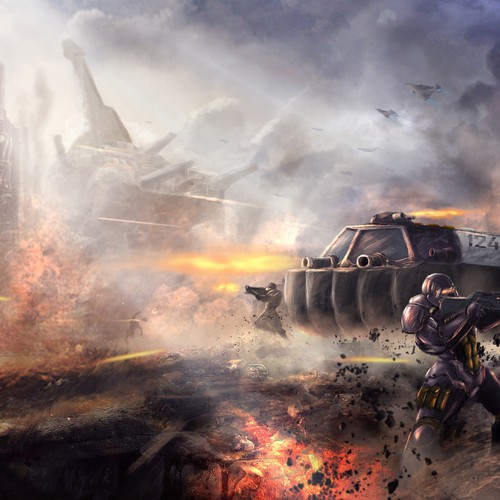 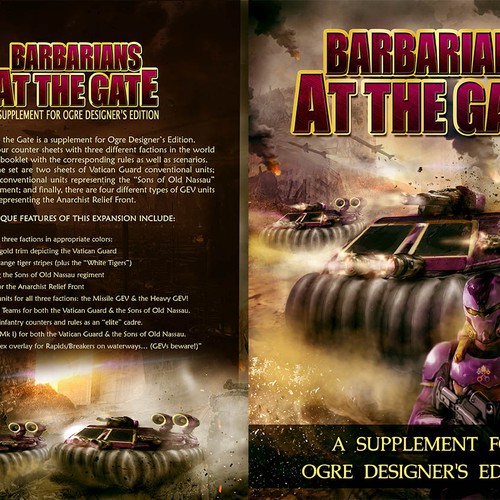 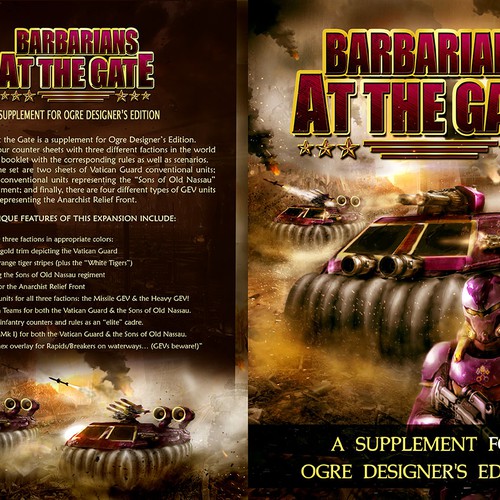 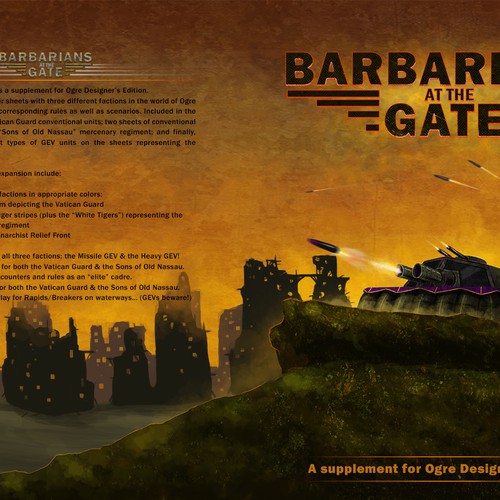 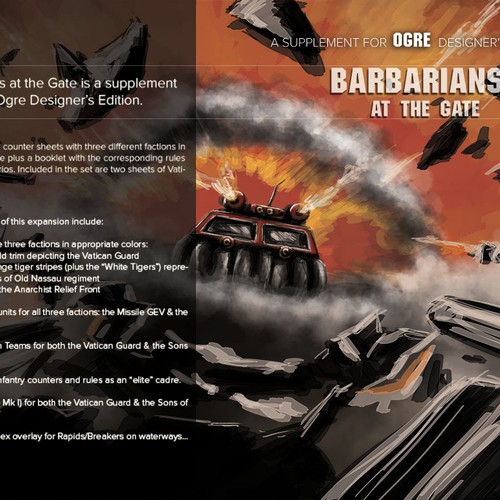 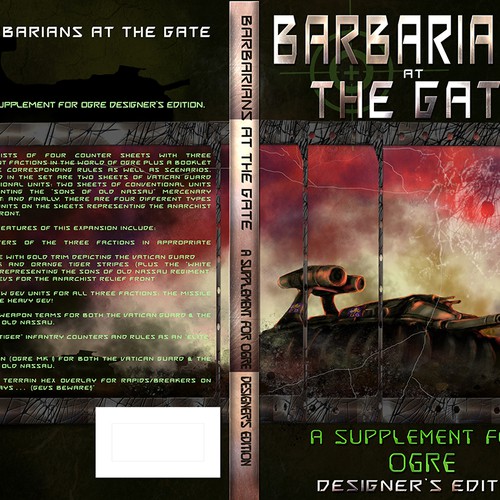 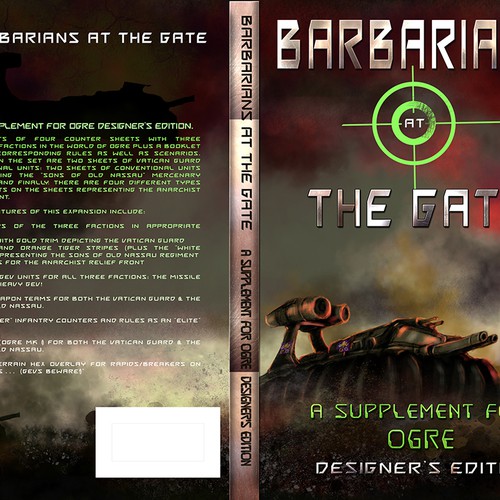 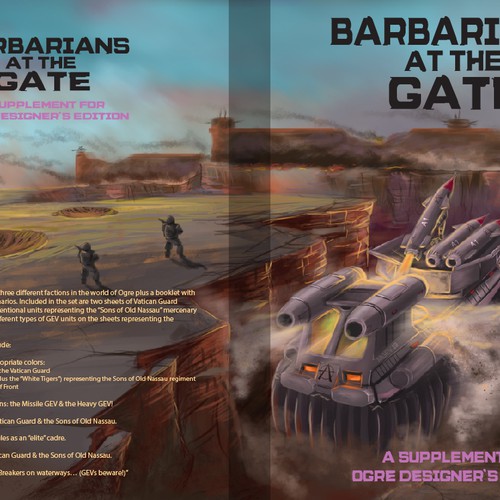 Winner - El art
This is the 4th cover El Art has done and I have yet to be disappointed. Great to work with, very professional. I look forward to the next project.
- joe.garry

Finalist - Ivan_Sevic
Fantastic artist, managed to put my hazy ideas together into beautiful artwork that was *exactly* what I wanted. Very flexible, responsive and helpful - I will definitely be calling on Spartacus Design again.
- Toby4

I have designed a supplement to the game Ogre Designer Edition (ODE). My supplement is titled "Barbarians at the Gate". ODE is a futuristic tank board game originally created in 1977, that was updated with premier components this past year via an exceptionally successful Kickstarter program. My supplement introduces two new types of tanks, details a variety of new variant rules, and has game counters for three new factions. The target audience is mostly male, with the primary age range being 35-55, although a secondary ('new-wave') group of beginner players would be 15-25. But anyone who enjoys tanks, science fiction and board games would be appropriate.

I need a cover for the rulebook associated with the counters and rules that I have designed. The title of my supplement is “Barbarians at the Gate”. Artist should visit the Steve Jackson Games website to gain some familiarity with the game and the various tank designs already in existence. Some good starting points would be the following links:

The last link depicts the ‘Galahad’ GEV; GEV stands for Ground Effect Vehicle and represents a fast moving, moderately armed manned unit. The two new units in my supplement are based off this design. The first (and most popular) one is a Heavy GEV; it should look very similar to the GEV depicted, only it has two main cannon in front as opposed to one. The second new unit in the game is a Missile GEV; instead of the front mounted cannon, it carries a missile launcher capable of launching many missiles at an enemy tank.

The premise of the game is that the world is engaged in a massive war; large cybernetic tanks rule the battlefield (think Keith Laumer’s “Bolo” series). These massive tanks are called Ogres, and can destroy scores of manned ‘normal’ tanks before they succumb. There are a variety of factions controlling the planet, the two largest being the North American Combine and the Paneuropean Federation. My supplement brings counters for three new groups: The Vatican Guard, the Sons of Old Nassau and the Anarchist Relief Front. The Vatican Guard is an elite fighting force of the Vatican, with primary colors of purple trimmed with gold. The Sons of Old Nassau are a mercenary regiment with ties to Princeton, using tiger-striped livery. The Anarchist Relief Front is a splinter group off the Paneuropean Federation led by a charismatic Captain Megan Grace as she fights to defend the populace in a war torn countryside. Her vehicles are emblazoned with a pink “A” in a circle.

I think the Heavy GEV should figure prominently somewhere; it is the defining new unit in the set. If you chose to use the Missile GEV, I hope you can come up with a better-looking missile rack than the one on the game counter! Definitely feel free to use artistic license here... Additionally, I think the Vatican Guard should be the dominant faction depicted, in that it is the premier force. This is not to say the others can't be present, if it works...there can be combat between any of these factions. Whether there is only one vehicle or more than one is up to you. The book will have a back cover too, so the art can wrap around if that's helpful. Or the back can just be a solid color with writing on it. Whatever works. It will be a standard 8.5x11 size. One idea would be to have on the back cover a silhouette or distant image of an Ogre, either destroyed or whole, on a battlefield that wraps around from the front. Despite this supplement being about the conventional units of these forces, the Ogre is THE namesake of the game and the premier unit.

As an aside, I personally don't envision the livery of the actual combat units to be as brightly colored as the game counters depict. I always figured the counters were more of a holographic representation of the battle in a commander’s suite, and not the true units. Certainly the colors are chosen so that they represent the units in question, but I would think an actual Vatican Guard tank would be more neutral (olive, tan, steel, whatever) with purple and gold trim or insignia. Likewise for the rest of the units (my backstory for Capt. Grace has her emblazoning her "liberated" GEV with pink, not dousing it...). But I'm interested in your vision as well... The tanks may be brightly colored if it works for the art.

Writing on the front should include the title (Barbarians at the Gate) and subtitle (A supplement for Ogre Designer’s Edition). The placement of both is left to the needs of the artist. The back needs to have the following text:

“Barbarians at the Gate is a supplement for Ogre Designer’s Edition.
It consists of four counter sheets with three different factions in the world of Ogre plus a booklet with the corresponding rules as well as scenarios. Included in the set are two sheets of Vatican Guard conventional units; two sheets of conventional units representing the “Sons of Old Nassau” mercenary regiment; and finally, there are four different types of GEV units on the sheets representing the Anarchist Relief Front.

Unique features of this expansion include:

• Heavy Weapon Teams for both the Vatican Guard & the Sons of Old Nassau.

• “White Tiger” infantry counters and rules as an “elite” cadre.

• Pikemen (Ogre Mk I) for both the Vatican Guard & the Sons of Old Nassau.

I have attached files of some line art for the two new units, as well as images of regular GEVs used on the game counters for the three factions. Please note the logos on the vehicles and on the powersuits.

I may offer the winning artist the opportunity to create some internal black & white artwork as well for an additional payment.

Create a sci-fi book cover based on a birds eye view of a really funky college campus
USD 499
COVER ART for a sci-fi / geek-lit novel...
35
entries
8
designers
Couverture du livre "Heureuse Malédiction".
€609
Je souhaite m'auto-publier...
81
entries
25
designers
Create an elegant cover for a “friends album”
229 €
Many kids have an album where they collect all their friends. We are making a grown up version of that and give i...
31
entries
5
designer graphistes
Create a book Illustration for soon to be published Scifi Fantasy novel, Opal Charm!
US$ 299
I'm an author who is publishing a YA novel, starting in America. Opal Charm: The Path to Dawn. The target audience is...
22
entries
6
diseñadores
Hoard The Spoils Fantasy Role-playing game book cover
$499
My organization is about publishing games, graphic novels and books to inspire courage and individuality. The produc...
21
entries
8
designers
Book cover design for The Invisible Game
$299
It's an e-book designed for eSport enthusiasts. It will be targeting professional gamers who want to develop not only...
71
entries
15
designers

Get started now
Create catchy book cover design for video game making book
499 $US
Create a catchy book cover design for video game making book. This book is targeted towards children and young adults...
38
entries
9
designer graphistes
Design a monster adventure story book cover
A$399
Author writing fantasy/sci-fi adventure stories for new adults/young adults....
23
entries
7
designers
Fun, creative book cover about century ride training for road cyclists.
$299
Gold Coast Cycling is a road cycling blog with an audience of road cyclists from the United States and Europe. The...
152
entries
17
designers
Powerful book cover for first in a series of fiction books about a boy's journey of sexual abuse
AUD 399
I have written a series of fiction books with a focus on child abuse....
65
entries
26
diseñadores
Fireworks Company Needs Logo!
$299
We're a family owned fireworks retail business. We've been selling fireworks as a family since 1984. We want a logo that
102
entries
18
designers
Casino logo with a CLAW!
US$299
CasinoClaw.com is a Hotels.com for the online gambling industry. Customers visit us to get information about slot games,
61
entries
26
designers
Learn more about book or magazine cover design
See how it works